What is a Post Term Pregnancy and What to expect

Once again, my due date had arrived and past.

We were dealing with another post term pregnancy induction. With previous pregnancies, the question of “are you sure you have your dates right?” was often raised. THIS TIME, I made sure to track my periods and potential conception dates to make sure the the first day of my LMP was as accurate as possible.

From the title, you may be wondering “what is a Post Term Pregnancy”? It is defined as a pregnancy lasting beyond the recommended 41 weeks and 6 days of gestation.

Yet, we were staring down another post term pregnancy induction and battling potential induction dates…. 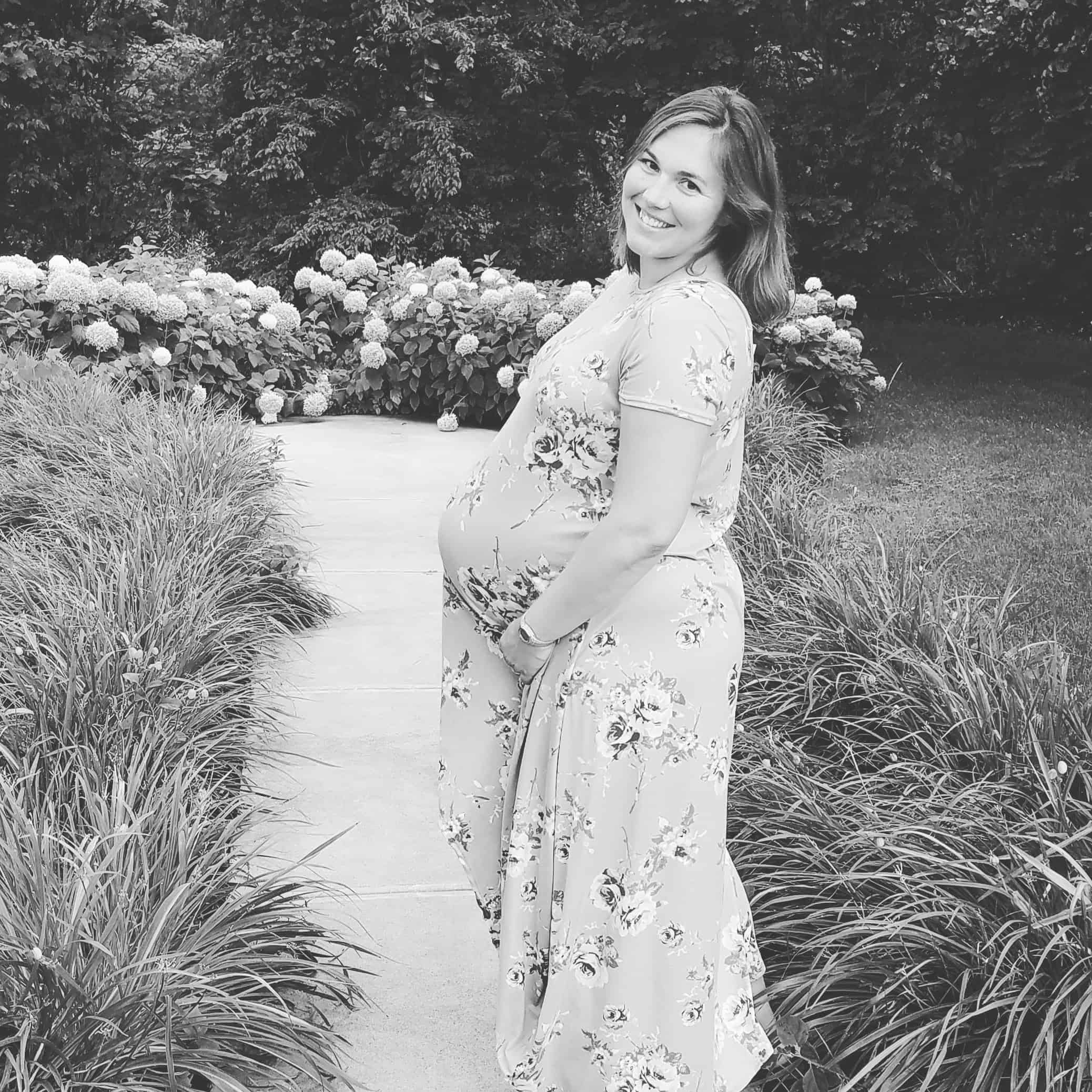 Midwife: How about this Thursday at 42 weeks and 2 days?

Husband: How about Monday at 42 weeks and 6 days?

ME: Ok (giving in quickly due to sheer exhaustion of the baby weight and long gestation)

You see, this pregnancy had started to “weigh” on me physically and mentallytherefore prompting an earlier than usual post term pregnancy induction. However, I knew in my gut (as did my husband) that we should really wait a few more days. 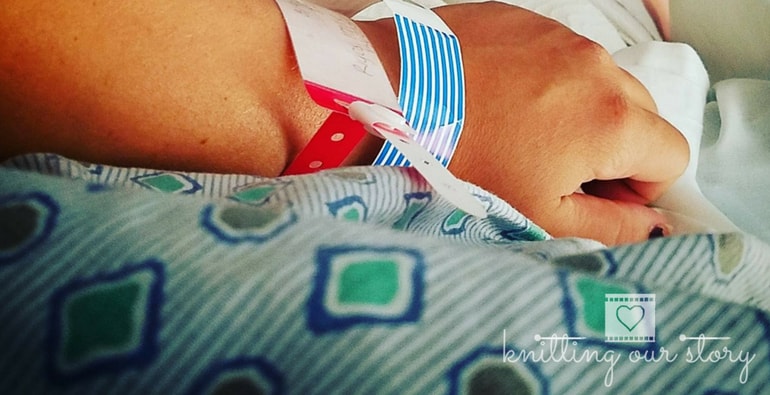 Yet, we agreed and arrived at the hospital Thursday morning at 8:15am. The initial exam measured my cervix at 1-2 cm dilated with a 70% effacement. The pitocin induction started at 10am. (Important side note, since I was also a VBAC the only other induction method available to me was the foley balloon.)

The pitocin was slowly increased throughout the day eventually reaching a drip of 14 ml.

A positive note was that the pitocin was actually causing contractions, which with baby one it did absolutely nothing – for hours – leading to a “failure to progress” and c-section.

Physically, I was starting to feel extremely tired from the lack of substance and stationary bed position. Also, the contractions had picked up in speed and intensity so by 5:30pm the pain was going around my back and up the left side of my belly. However, they were still tolerable with easy breathing methods (I was still able to communicate during the contractions).

After the nurse shift change, we received the nurse who had delivered our last two girls and felt hopeful that maybe her presence would bring on the baby!

However, she did let us start moving around and hooked me to monitor that allowed me to walk around the ward. Walking around the ward brought some peace, laughter and anxiety. My husband and I were able to joke around. But at the same time, we could hear mothers laboring and the cries of newborns.

Fun fact: I heard four other babies delivered while waiting for our little guy.

At 7:30pm, I was checked for progress and my cervix was 3-4 cm so beyond the Foley balloon! So the pitocin was continued at 14 ml until 10pm!

Day One summary: On pitocin from 10am-10pm but only dilated to 4 cm. They recommended a break from the pitocin (eat food and sleep) for the night to rest myself, baby and uterus. Everything still looked good for me and baby but labor was slow going – again. 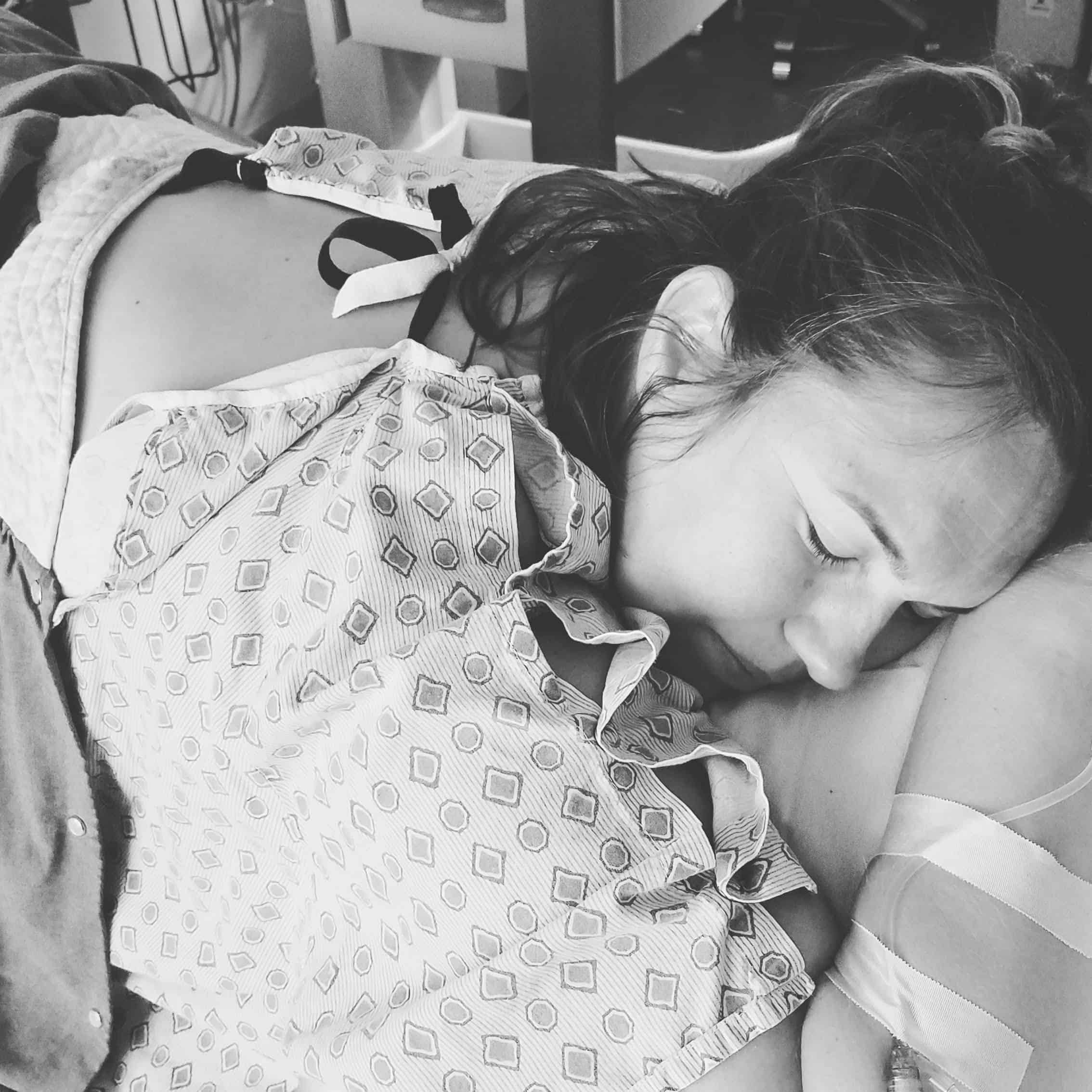 After a long day, we were able to eat and sleep with the occasional check on my vitals.  The plan was to start pitocin again at 4am but the nurse was occupied with another birth (no complaints here!)  During the in-between, we used the “peanut ball” to try and open the pelvis to shift the posterior position of the baby’s head.  Right after the nurse shift change the pitocin drip was restarted around 8:07am on Friday morning.

Want to know something crazy?

I was able to sleep through mild contractions up until 11:30am and the pitocin reached 12 ml. At which point, I woke up and the contractions started to increase in speed and intensity. Since, I hadn’t been checked in hours the nurse attempted. Key word “attemped”. Once again, my cervix was not engaging and was so far back (posterior) that she couldn’t reach it to check.

The discouragement was really starting to get into my heart and mind. My husband started to suggest we just go home to let my body relax and progress into natural labor VS continuing this induction in the hospital. However, the hospital and staff advised against it since we were attempting our third VBAC and the pregnancy had passed the 42 week mark.

I had noticed that the midwives and nurses were being kind during the check-ups. At 3pm, I informed the midwife to be “mean” to my cervix so that she could strip my membranes and pull it forward – and she did just that! No real progress since I was still 3 cm so the pitocin drip continued until it reached 20 ml by 5pm.

We were changing positions, playing worship music softly, along with lots of prayer (sneaking a few bites of protein bars in between the jello, broth, and ice chips). Yet, nothing was changing!

At 6pm, we had a serious conversation with the midwife about the lack of progress. We discussed leaving the hospital even though it would have required an “Against Medical Advice” (AMA) document along with other potential interventions.

By 7pm, I was exhausted therefore requesting and granted the ability to rest another night OFF of the monitors and pitocin. After a good meal and some rest we tried a “soap suds enema” to no avail.

So we rested until 4 am. 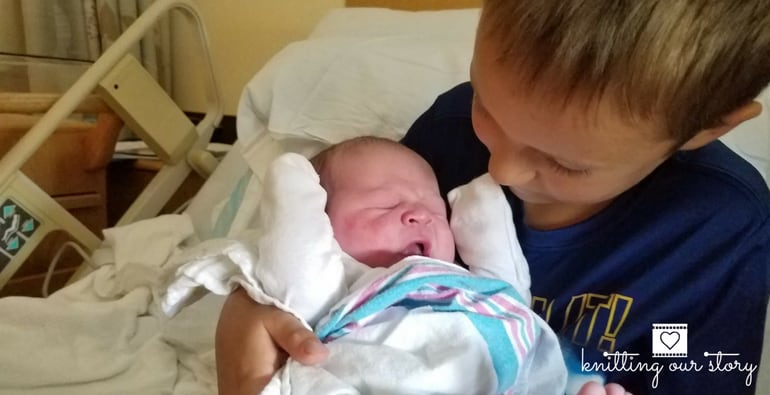 No delay starting the pitocin at 4am on Saturday morning. Along with a serious conversation about another unsuccessful exam and the potential of a c-section. The option to continue the induction was still on the table but everyone was starting to get nervous. Exhausted from the restless night and anxiety, my husband and I slept through the morning until 11am.

At this time, my hope was low along with my persistence to “wait it out”.

I asked to get up and start moving around to handle the contractions. Yes, I was still having contractions even though I was able to sleep… The midwives, staff and us as well, realized that I must have a high tolerance for pain or be a masochist (I am going to lean towards a high pain tolerance).

Right after the position change (laying flat to standing), I felt a little head movement shift that was painful and different.

Decided to call a friend to ask for prayer (we actually used voxer so not a “real” conversation). I requested she pray for the only “intervention” left at our disposable. HIS intervention.

I prayed long and hard for the Lord to lay his hand on our situation. To start the labor. To make progress. To make HIS will be done no matter what it may be (natural birth, etc).

Still feeling a little discouraged but hopeful, I called the kids to share the progress and ask for prayers.

THEN, my  mother shared that the kids had been praying for me. I was overcome with emotion and amidst the tears a strong contraction rocked my body. Thinking it was a fluke I didn’t mention it to my mother on the phone. She continued to share about the recent week of VBS activities when ANOTHER contraction stole my breath away! She quickly got off the phone so I could breathe through it.

Literally at 12:44 pm while on the phone with my mom I had two very strong and very different contractions. She told me how the kids were praying for me. I was overwhelmed with emotions due to their love for us and trust in the Lord. I was brought to tears of joy…. Then it happened. 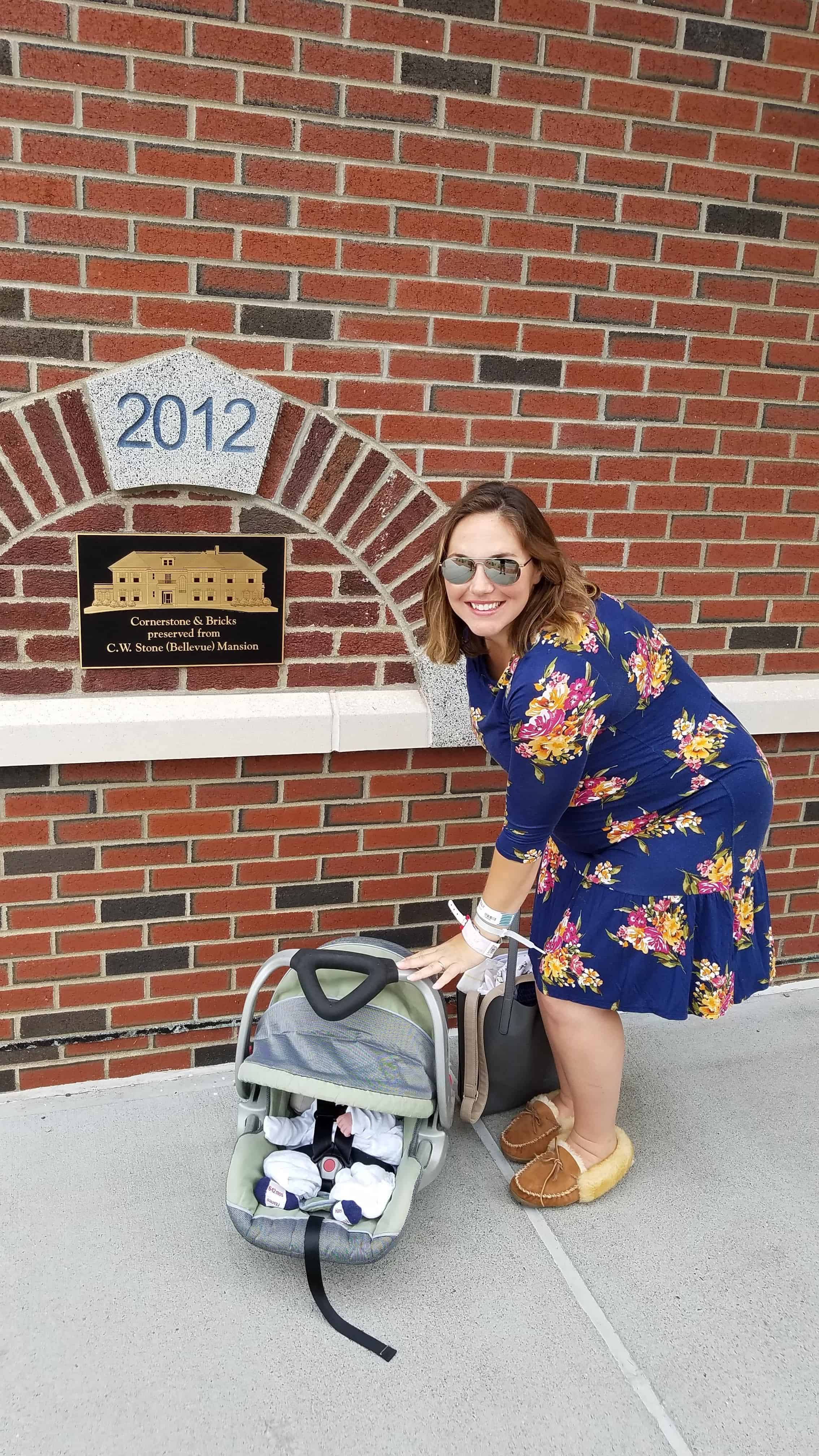 I immediately called my husband (he was out grabbing lunch) and said things had shifted get back now.

Meanwhile, we were waiting for the head of OB to come in for a check but things were busy on the ward. Which honestly worked to our advantage. Those stronger contractions were continuing and giving us hope.

Finally around 3pm the hospitalist came in and said that my cervix was accessible (hooray), at 0 station (another hooray), dilated to 5 cm (HUGE YIPPEE), and 100 % effaced!!!! I literally high fived my midwife and attending nurse followed by a long hug with my husband.

HOWEVER the hospitalist was concerned as well.

The contractions were becoming more painful and I like to move through the contractions in an upright position bearing down through my feet. The standing and sitting was affecting the “constant monitoring” that was necessary due to the pitocin. He saw “decelerations” on the monitor that caused him concern and wanted me monitored the entire time. The nurse and midwife were convinced that the decelerations of the heartbeat were really my “high” heart rate during the contractions due to movement..

Yet, the monitoring was a necessary evil.

My way of meeting the hospital/providers halfway through this process.

At some point in the afternoon, my nurse noticed that my contractions were stronger and close. At which point she turned off the 20 ml pitocin to let my body do the work.

I naturally labored through to the end!

So 1pm to 10:40pm I labored from an unfavorable 3-4 cm to a very favorable 9cm!!!!! At which point, my midwife kindly and respectfully suggested we rupture the membranes to ramp up the contractions and speed things up.

The contractions were intensified along with the urge to push. The midwife and nurse started to encourage me to redirect the “energy” in my mouth aka screaming/grunting in to pushing. I seriously said no lol!

Meanwhile they were prepping behind me. Yes, I labor on the top of the bed on my knees facing the wall and have done it for a total of three times now. They were encouraging me to push and I did but as I continued to push through each one it became obvious that we weren’t really ready when he started to emerge.

At 11:22pm. Yep 10:40pm to 11:22pm was my transition/pushing labor. He spent hardly anytime in the birth canal and came out with a nice round head. 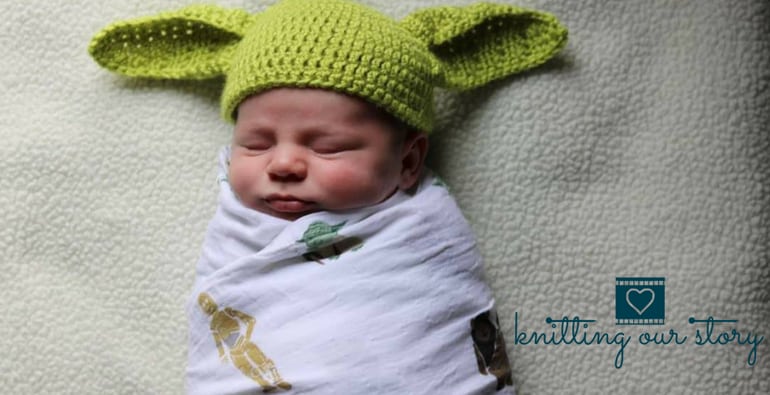